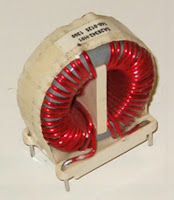 Common mode inductors, more generally known as chokes, are used to filter unwanted electrical noise usually caused by the switching action of switch mode power supplies.  Specifically it filters out common mode noise or noise that is common to both the positive and negative outputs of a dc power supply, for example.  The main idea behind a common mode inductor is that you put two symmetrical windings on a magnetic core, typically a ferrite toroid core, and mount it a plastic header, see figure 1. The windings are connected so the current flow will be in equal but in opposite directions.  This keeps the core from saturating since it will have two equal but opposite magnetic fields and the full inductance of the core will help attenuate the switching noise common to both lines, see chokes/common mode inductors.

Typically common mode inductors handle currents ranging from tens of mA to about 20A. This means wire gauges from #38 to #12 are commonly used. Currents much above 20A are usually not wound on a toroid since the core can break due to winding stress associated with heavy gauge wire. Other core shapes and unique windings are usually used above 20A. Also multiple inductors in parallel could be used. High permeability ferrite materials are very susceptible to winding stress and inductances can be down to 50% of the expected inductance due to the winding stress on the core. Usually heating the wound cores slowly relaxes the stress and brings the inductance back up. I emphasize that the heating should be ramped up and down slowly since ferrite is a ceramic and can crack due to rapid temperature changes.
One of the more surprising aspects of toroidal common mode inductors, or toroids in general, is that they are wound automatically, not by hand on toroidal winding machines.

Posted by Butler Winding at 9:25 PM