When Exciting Current Gets Exciting – Redesign the Transformer 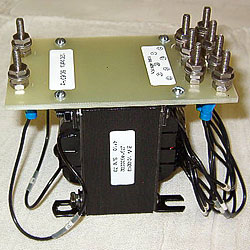 The process of raising or lowering incoming voltage is very efficient, that is, the power that’s fed into the primary side is nearly equal to the power on the secondary side.  But there are power losses, which cause small inefficiencies.  One of those power losses comes from what is called “exciting current”.  Exciting current is the amount of current required on the primary side to create and hold the magnetic field even though there is no secondary current flowing.  That may sound confusing, but think of it as the amount of gasoline your car uses to idle when not moving.

One of our customers supplies railroad equipment.  The railroad routinely monitors the railroad traffic signal lights, which tell the engineer on the train which track(s) is available and if there is oncoming traffic.  The railroad traffic management system monitors the electric current consumed on the primary side to determine if their signaling lights are operable or burned out.  If a current is flowing then obviously the light is working.  No current would indicate that the light was burnt out, and the management system would send out the repair crew to replace the bulbs in the signal light.

Our customer discovered that the transformer used in the signal light had such a high exciting current that the primary side was showing it was consuming power all of the time.  This prevented them from being able to tell if the signaling light was working or not.  As you can imagine, signaling lights malfunctioning can be devastating by causing trains to take the wrong tack and lead to disasters such as derailing or collisions.

At Butler Winding, we design and manufacture transformers.  In this case, the solution was a conventional E I laminated power transformer redesign that focused on lowering the exciting current to a minimum.  This was done by making the core larger by about 30%.  The larger core meant that the magnetic field could energize the core more easily, thus reducing the exciting currents by over 50%.  The exciting currents were then small enough that they were easy to distinguish and the railroad could be absolutely sure if the signal light was on or off.

A special thanks to Tom Clapper at Butler Winding who put in extra effort to complete this project, and thank you to everyone for solving this problem.  View examples of typical power transformer designs Butler Winding has completed.